In my last post I briefly covered the Cash-Landrum case in Texas during the end of December 1980. I will provide some background on Rendelsham Forest this time and discuss why I feel it is still possibly the most compelling case in Ufology.

Rendelsham is one of the most covered incidents in the community. It has been covered at length across all media over the nearly 40 years since the incident occurred. It has been called “Britain’s Roswell”.  Due to heightened Cold War tensions the United States Air Force was using two of the UK’s Royal Air Force bases. RAF Bentwaters and RAF Woodbridge, which are separated by Rendelsham Forest in Suffolk, England.

Around 3 am EST December 26, 1980 security personnel at Woodbridge saw lights falling into Rendelsham Forest. Staff Sergeant Jim Penniston along with Airmen First Class John Burroughs and Edward Cabansag, went into the forest to investigate what they thought might be a downed aircraft. Due to communication issues, Penniston ordered Cabansag to remain behind as a radio relay point from the investigators to the base. Penniston and Burroughs would move further into the forest losing all radio contact (electronic failures are widely reported in the presence of UFO’s). While Burroughs reported being scared. Penniston moved further into the forest alone. He reports encountering a metallic, triangular craft he described as “not of this world”. Penniston stated that he touched the weird symbols on the craft and later it was as though this binary code had been downloaded into him. Penniston said that the craft finally sped away quickly after he had also photographed it extensively. Penniston has stated that the film had been confiscated. 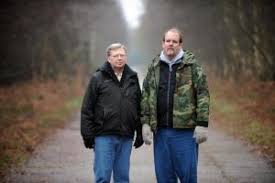 Penniston’s drawing of the craft

Penniston’s drawing of the symbols he touched.

On the night of December 29, deputy base commander Lt. Colonel Charles Halt went into the forest with a team. Radiation readings were taken at the “landing site” which showed only slightly elevated radiation readings. Lt. Colonel Halt also stated in his report to the British Ministry of Defense that later in the night he witnessed a “red sun-like light” moving through the trees, and that it broke into five separate pieces. Then three bright lights were observed hovering over the area. These objects were hovering for several hours. Halt has also stated that beams of light of various colors had been directed at the area near his patrol and the base weapons storage.

The nature of this article is simply to speak to the reasons I was captivated by this incident. I have given a summary of the facts above. As mentioned there are many sources for the Rendelsham incident. I want to speak to why I feel it is still very compelling. The “expert” view is that on the morning of the 26th, base personnel likely saw space debris or meteorite’s burning up over the area. All of Penniston’s encounter with a craft is usually written off as impossible by skeptics. Halt’s sightings are blamed on the Orford Ness lighthouse several miles from the base. Also skeptics claim that the hovering objects were simply stars. These are trained career United States military men. These are reliable witnesses. After nearly 40 years, their accounts remain solid and credible. I am not an Air Force trained soldier let alone an Lieutenant Colonel entrusted as the deputy commander of a key NATO base, yet I know the difference between lighthouse lights and those described by Colonel Halt. Sergeant Penniston was highly trained and enjoyed a career before and after this incident. Given this fact he too can be trusted to understand the nature of the object with which he claimed to make contact. It is for these reasons, this case to me stands up to scrutiny. Even with such credible witness testimony, the UK’s MoD never officially investigated this incident.  Yet it ranks as the most famous UFO encounter in the United Kingdom.

If you enjoy discussing the paranormal please join our chat. Telegram

***My  opinions are my own. They do not necessarily reflect those of the Paranormal UFO Group nor its members.***